William Powell Frith was encouraged to take up art by his father, an hotelier in Harrogate. He moved to London in 1835 when he was sixteen, where he began his formal art studies at Sass’s Academy, before attending the Royal Academy Schools. Frith started his career as a portrait painter and had his first exhibit at the British Institution in 1838.

The principal influence on his work was the popular domestic subjects painted by Sir David Wilkie and his famous painting The Chelsea Pensioners was an inspiration for the creation of Frith's most famous compositions.

Following Wilkie as a reference point, and additionally imitating the work of his friend Dickens, William Powell Frith created complex multi-figure compositions depicting the full range of the Victorian class system, interacting in public places. The Derby Day, depicting scenes among the crowd at the race at Epsom Downs, was based on photos. This 1858 composition was bought for £1,500. It was so popular that it had to be protected by a barrier when shown at the Royal Academy of Arts. In 1865 he was chosen to paint The Marriage of the Prince of Wales. He retired from the Royal Academy in 1890 but continued to exhibit until 1902.

Frith was a traditionalist who made known his aversion to modern art developments. He was also a deep-rooted foe of the Pre-Raphaelites and of the Aesthetic Movement, which he mocked in his painting.

William Powell Frith lived a double life, a happy domestic life married to Isabelle with twelve children, while a mile down the road maintaining a mistress Mary Alford, his former ward with seven more children all a marked contrast to the upright family scenes depicted in paintings. Frith married Mary on the death of Isabelle in 1880. In his later years, he painted many reproductions of his own famous paintings, as well as more uninhibited works, such as the nude After the Bath. 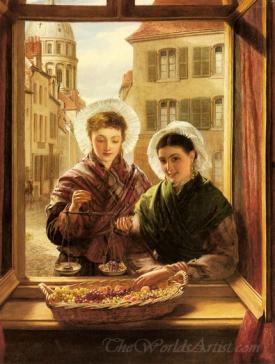 At My Window Boulogne 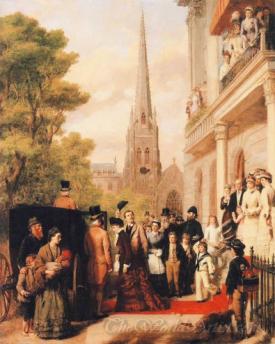 For Better For Worse 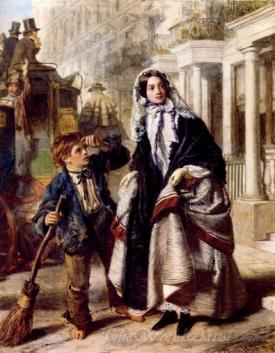 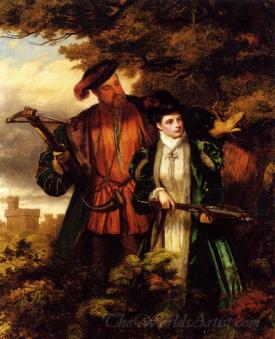 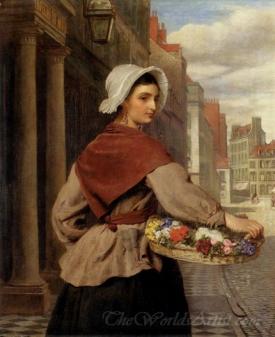