Eugene Alexis Girardet came from a Swiss Huguenot family. His father was the engraver Paul Girardet. He studied at the École des Beaux-Arts and in the studios of Jean-Léon Gérôme, who encouraged him to visit North Africa in 1874.

So, he left for Morocco, then traveled to Tunisia and Algeria, for which he developed a particular fondness. In all, he made eight trips to Algeria, he spent later visits in Algiers and Boghari, but above all in El Kantara and Bou-Saâda, where he met Etienne Dinet who later made the desert oasis his home. Grirardet’s meeting with Dinet in 1877 was additionally to profoundly affect how he thought about his work. The Academic Realism and narrative content of his earlier painting evolved into a more serious study of the culture and subject matter. Eugene Alexis Girardet painted simple everyday scenes, herds of goats in the dust, prayers in the desert and nomad life.

During the late 1870’s and early 1880’s Eugene Alexis Girardet exhibited a number of works at the Paris Salon as well as exhibition halls throughout the Continent. In 1898, he visited Egypt and Palestine, producing many works depicting the lives of desert nomads. He was one of the founding members of the Société des Peintres Orientalistes Français (Society of French Orientalist Painters), with major shows at the 1900 Exposition Universelle and the 1906 Exposition Coloniale de Marseille.

On The Way To Market 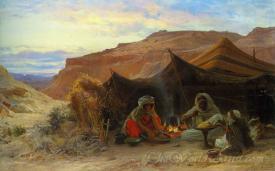 Bedouins In The Desert